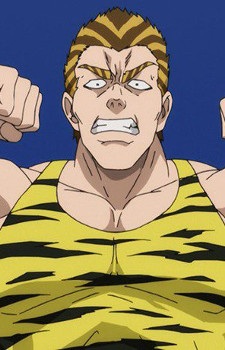 
Race: Human Occupation: Superhero Level: C-Class; Rank: 6 Affiliation: The Heroes Association Debut: chapter 19 Tanktop Tiger is a C-Class superhero, rank 6, and the younger brother of Tanktop Black Hole. Tanktop Tiger is a large, muscular man who has tiger stripes running through his hair and eyebrows. He wears a tiger stripped tanktop. He is especially loud and obnoxious. He is confident in his own power and looks down upon superhero newbies, making him quite arrogant and hostile. (Source: One Punch-Man Wikia)