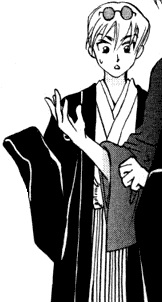 
Tatsuyoshi is Ito's 15-year-old brother, who always wears sunglasses on his head which he calls being cool. A typical teenage boy who loves to hang out with his friends and play at the arcade. Being the youngest means that he gets stuck with a lot of the work. The rule in the Miura family is "absolute obedience to anyone older." Although he may not show it as much as his older brothers, he cares a lot about Ito, and defends her when necessary. He is part of the student council, and shows a strong interest in one of the members named Rie-chan. Even though he's said he wanted a girl that was the opposite of Ito, Rie-chan's personality and demeanor are identical to his older sister's. (from wikipedia)