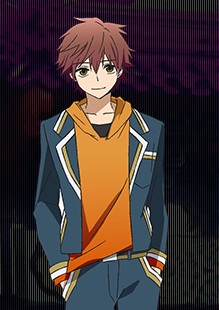 
A student at Yokohamabane High School whose cool personality made him the target of severe bullying. Despite his appearance he has low self esteem and often contemplated suicide over his bullying while relying on his teacher for support. Him and Rei are close to each other. It turns out that the bullying has been made by his teacher himself all along. Thus, he ends up being more lost towards himself until he destroys the funeral of his teacher, freeing him from the "false reality" that had always been shown to him. He later joins the Hamatora Detective Agency.