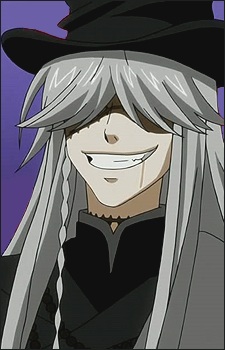 
Known only by his profession, the Undertaker is a mysterious man whose scarred face is never fully visible beneath his long hair and crooked top hat. He occasionally provides information to Ciel. While he finds Ciel amusing and enjoys helping him out, he has nothing but disdain for the Queen. He tends to punctuate his words with sweeping gestures and creepy giggles and seems to spend a good deal of time inside of coffins. He also likes to hear jokes and ask people to tell him for exchanging information. In the anime: He is revealed to be a Shinigami, one that William respects highly and is ranked in Management Level. Though he is legendary and retired, he still can access the Shinigami Library and alter the books. In the Manga: In chapter 35, a manga panel showed that he is somehow linked to a person with a name, Claudia P. His scythe is akin to that of the stereotypical Grim Reaper scythe. In chapter 59 of manga, during the Ship arc, he is shown to use Japanese Grave markers (Sotoba) as weapons. In chapter 60 of the manga it has been confirmed by Grell that he was a Shinigami. He is now retired and bored, so he creates zombies out of curiosity. Also, this is the first time you can see his eyes. In chapter 82 of manga, it is revealed that he was, in fact, the principal. (Source: Devil's Food Cake Site, Wikipedia)