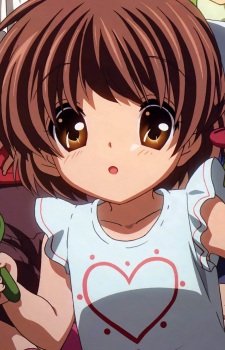 
Ushio is Tomoya and Nagisa's daughter. She is a well-behaved, well-loved girl who is very curious about the world around her. Tomoya notes that she does not act like other girls her age. For example, most girls would want to have dolls; however, when Tomoya goes on a trip with her, he buys her a robot with which she is fascinated. Tomoya, finding it strange that she would prefer this type of toy, learns that Ushio has a some interest in robots; thus he also calls her "boyish". Ushio also appears to like baseball. Ushio's interest has been influenced by her grandfather who teaches her to imitate famous baseball players. She refers to Akio Furukawa as "Akii" and calls her grandmother by her given name "Sanae". In the few earlier episodes of the stories, Ushio stays with Sanae and Akio. During her time with her grandparents, she learns to be a baseball addict like Akio, Ushio also learns strict disciplines from Sanae not to cry unless it is in the restroom As the story progresses with Tomoya's recovery, she starts to live with her father. As she lives with her father, she later becomes friends with Ibuki Fuko, the sister of her mother's old teacher, Ibuki Kouko. Due to the lack of time Tomoya can spend with Ushio, she sneaks out of her father's house to view a hospital she refers to as "pleasant." This is the place that Akio once took Nagisa to beg for her life. One day, Ushio falls dangerously ill, and the doctor's conclude that she has contracted the same mysterious illness that Nagisa once had. To support his daughter, Tomoya quits his job and chooses to stay with Ushio as she unsuccessfully fights for her life. Ushio asks Tomoya to take her on a trip like the last one they went on, but he refuses, saying she needs to heal first. Tomoya finally gives in the second time she asks. As they walk towards the train station in the snow, Ushio collapses, whispers "I love you" to her father, before dying in his arms. In the last episode it is discovered that Tomoya used his wish to combine both their world and the illusion world to allow Ushio to remain with them without the consequences of Nagisa's death.