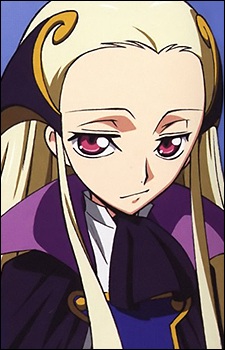 
V.V. is a mysterious boy with blond hair longer than his body. He is the twin brother of Charles di Britannia, but looks much younger because he has gained the power of immortality like C.C. He can grant Geass contracts like her, having given both his brother and Rolo Lamperouge their Geass abilities, among others. He leads the Geass Directorate, a secret organization that studies and produces Geass users. V.V. briefly appears in episodes 18 and 19 of the first season, where he transports Lelouch, Suzaku, Kallen, and Euphemia to Kaminejima, then collapses the floor beneath them later on. Immediately prior to the Battle of Tokyo, he appears before Suzaku and explains the nature of Geass. He subsequently kidnaps Nunnally, resulting in Lelouch's sudden abandonment of the Black Knights' chain of command. In the second season, V.V. and the Emperor are working together to defeat the gods that are making humans fight among themselves. During Lelouch's assault on the Geass Directorate, he pilots the Siegfried against the Black Knights. Though he manages to hold his own at first, he is caught off-guard by Cornelia, who has hotwired a damaged Akatsuki with an array of weapons. She and Lelouch destroy the Siegfried together. He manages to reach the Twilight Door in the complex and give his immortality to his brother, then succumbs to his wounds. In the Sony PlayStation 2/Sony PlayStation Portable video game, Code Geass: Lost Colors, V.V. is sighted on Kaminejima with Rolo, who also gained his Geass from V.V.