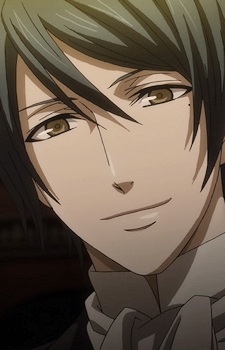 
Birthday: June 13, 1851 Zodiac sign: Gemini He was the head of the Phantomhive family and handsome enough to attract the attention of both Rachel and her sister Angelina, though he favored the older, more refined sister. It's because of his compliments on her red hair that Angelina originally began wearing red. Though he appears in several flashbacks, his face is never shown. He and Rachel were killed on Ciel's tenth birthday. Vincent was a handsome, well-dressed man with short, dark hair, a mole under his left eye and a kind smile. He bares a vague resemblance to Sebastian Michaelis. When alive, he was shown to be exceptionally kind and welcoming. This was demonstrated when he noticed that Angelina is self-conscious of her red hair and he made a point to compliment it. He also welcomed Baron Kelvin in to his home, and always took a minute to spare a greeting and a kind word, while others of his social status looked on with disdain. People were shown to have been easily drawn to him, as Angelina fell in love with him easily, and as a child, Ciel accompanied Vincent whenever he could, even when still recovering from being ill. He was a loving father and his family was always very important to him. However, he was just as capable as Ciel at manipulating individuals, and Baron Kelvin took note of him and his acquaintances as being "evil noblemen." It is shown that Undertaker was acquainted with the Phantomhive family when Vincent was the head. Another is shown in chapter 75 when he gets a "German dog" which he had a bet with. Vincent was the head of the Phantomhive household and acted as Queen Victoria's watchdog, both titles that Ciel later took over. Tanaka has shown to have worked for the Phantomhive family at least since Vincent's time. Sometime while he was alive, he hosted a variety of parties that many others nobles attended. When Baron Kelvin attended one of these parties, it is the first time that he encountered Ciel, and he made a continued effort to network with Vincent after that. While Vincent was kind, the others were not, causing Baron Kelvin to believe he had to be more "beautiful" to be accepted by their social circle. As a result, Vincent is indirectly part of the reason for Baron Kelvin's obsession with undergoing plastic surgery and with Ciel. On Ciel's tenth birthday, Vincent and his wife were killed in a fire, his son was kidnapped, and his manor was burnt to the ground. It seems that the reason for this was related to his work as the queen's watchdog and his control over the underworld. In the anime, his death is directly attributed to Queen Victoria.