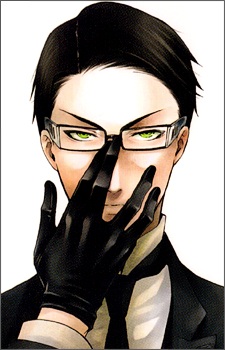 
William is a supervisor in the Dispatch Managment Division of the Death Gods. He appears in the 12th chapter of manga (or in the 6th episode of anime) to pick up Grell Sutcliff. William is emotionless and generally calm. In regards to his job, he is strict, follows the rules precisely, and seems extremely devoted. He does not take kindly to individuals who cause problems or create more work for him, particularly if it forces him to apologize for their actions. Nonetheless, he seems to share Ronald's distaste for overtime work. He has no qualms with inflicting minor injury on others, as shown when he jumps off a roof to land on Grell Sutcliff's head and when he uses his death scythe to attack Sebastian on a few occasions. He finds demons to be disgusting creatures, and is seen calling Sebastian Michaelis a variety of names, including "devilish fiend," "leech," and "hound." However, it is implied that he finds other demons to be even more abhorrent than Sebastian. In the anime, though, he is much more willing to work with Sebastian, as he aids him on a number of occasions. However, he does not seem to like anyone very much, as Ronald comments that William is disappointed to see him, and he insults a variety of individuals, including Grell, Sebastian, and Ciel Phantomhive.