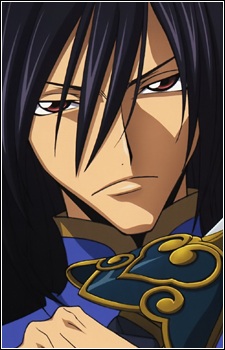 
Li briefly appeared in episode 23 of season one and made his full debut in the first episode of R2. Li is a member of the Chinese Federation. He possesses a sword, which he always carries with him. He is also fiercely loyal to the Empress, a trait not shared by any of his superiors. It seems that part of his goal is to reestablish the throne of China as the clear authority, as the current Empress is the head of a puppet government, with eunuchs holding actual power in the country. Li was formerly a bodyguard for the influential eunuch Gaohai, and accompanied him when he was sent by the Federation as a consul to the Britannian colony Area 11. They arrive right as the Order of the Black Knight's operation to recover Zero began. The Black Knights succeed in their mission and Zero orders the Knights to head to the Chinese Embassy for protection. Gaohai, under the influence of Lelouch's Geass, agrees to harbor the fugitives, which troubles Li as this is not part of their mission. He meets Karen KÅ�zuki and is impressed that someone of her age is the pilot of the Guren Nishiki. Later, as the Britannians wait to kill the imprisoned Black Knights, he attacks the embassy himself in an attempt to further his own plans and ideals. After the initial attack, Li holds a private conversation between himself, Karen, and C.C.. He informs them that he plans to kill Gaohai. Under threat by Li, C.C. agrees to let it look like Gaohai died when fighting with them. Li confronts Gaohai about having recognized the United States of Japan without confirming it with higher officials in the mainland, including the Empress. When he finds out that Gaohai, who is still affected by the Geass, cares more about Zero than the Empress, Li summarily executes Gaohai for committing lèse majesté. C.C. realizes his ambitions, and that his agreement to aid the Order of the Black Knights is only in return for the Black Knights being used as a tool to aid his own plans for China. Li is in top physical condition and is exceptionally skilled in close combat, especially with swords. He is capable of drawing his blade, striking, and sheathing it without his victims perceiving the blade being drawn or Li moving. It is also rumored that Xingke will pilot the Shen-Hu. Li Xingke has been described as "strong as Suzaku", he's also been described as "smart as Lelouch". He is able to quickly discern that Karen KÅ�zuki is the pilot of the Guren Nishiki Knightmare Frame. Li displays his intelligence when he deals with the escalating diplomatic and military situation that evolves around the Chinese Federation Consulate sheltering the Order of the Black Knights from Britannia. In addition to not provoking the Britannians to cause an international crisis or possible war, he also uses the unforeseen situation to his advantage to advance his goals and kill the eunuch Gaohai. He also seems to be able to appreciate Zero's intelligence and wit. C.C. comments that he is not only a skilled soldier, but possesses political skill.