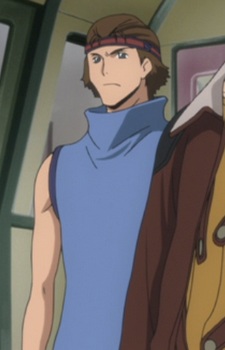 
Yoshida is a male with dark-brownish hair who was formerly a member of Naoto Kozuki's resistance team before aligning himself with the Black Knights in which he is involved in the provision of logistical support. He often wears a short-sleeved version of the Black Knights uniform's jacket. During the first Assault on Tokyo Settlement, he and three others were operating a RaikÅ� when Suzaku in the Lancelot destroyed the legs of each of the units, causing it to fall and explode, killing them. (Source: Wikipedia)