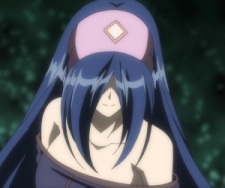 
Chikuzen, along with the other members of the Plus Six, are unknown to Maguro Kurokami, indicating that they did not become a part of the Flask Plan until after he left. She is a senior of Class 13 and a former member of the Flask Plan's Plus Six. Ten years later, Chikuzen is a hairdresser. (Source: Medaka Box Wikia)