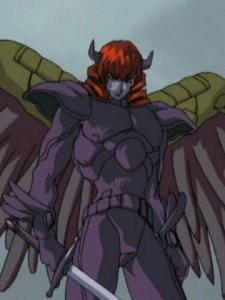 
After being abandoned on the battle field by his friend Lark, the angel Zaha took an offer by Redda to become a demon, so he could survive and take revenge. However his new role did not fall well and he was in a constant struggle with his conscience. Most of his malice comes from actions with which he tries to prove to himself that he made the right choice, coping with the trauma he increasingly brings onto himself. Eventually the angel Shiru revealed Lark did not abandon Zaha to save himself, but because Zaha was too injured to be moved and Lark was killed trying to divert the approaching troops as he went to fetch help. Shortly after realizing his error he turned against Redda and sided with the knights.